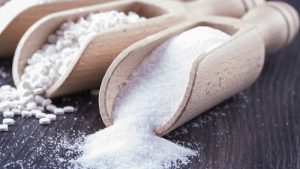 them. Today I am starting with Artificial Sweeteners.  The following is  information on Acesulfame-K and Aspartame:

Acesulfame-K: Used in candies, baked goods, chewing gum, dry
beverage mixes, canned fruit, gelatin desserts, diet soda, and as a tabletop sweetener under the brand names Sunette and Sweet One. About 200 times sweeter than sugar, acesulfame-K was tested for safety in the 1970s. The tests were not conducted with gold-standard protocols; however, two rat studies suggested that the chemical could cause cancer. In addition, large doses of a breakdown product
from this chemical affected the thyroid in test animals.

Aspartame: Used in breakfast cereals, soft drinks, drink mixes, gelatin desserts, frozen desserts, yogurt, chewing gum, diet foods, and as a tabletop sweetener under the brand names Equal and NutraSweet. Used in more than 6,000 products worldwide, aspartame is 200 times sweeter than sugar. Studies have suggested that it might cause cancer — especially with lifelong consumption — or neurological problems. Aspartame also lowers the acidity of urine and may make the urinary tract more susceptible to infection.

Aspartame is the most controversial food additive in history, and its approval for use in food was one of the most hotly contested in FDA history. The artificial sweetener was approved, not on scientific grounds, but because of strong political and financial pressures. With all the research now available on aspartame and its various ingredients, it’s hard to believe such a chemical would be allowed into the food supply, but it is, and it’s been silently wreaking havoc with people’s health for the past 30 years.

Just to refresh your memory, aspartame has been linked to the following health concerns:

The truth is, aspartame should never have been released into the market, and allowing it to remain on the market is really a serious public health issue—no matter how many times it gets rebranded with splashy new names, like Neotame and AminoSweet.

Aspartame has been the subject of a great deal of research over the past several decades. But much of this research has been seriously flawed due to major conflict of interest—funded by those interested in promoting aspartame at any cost.

The Most Compelling Evidence Linking Aspartame to Cancer

As Tom Philpott pointed out, aspartame studies have been extremely biased, depending on the organization providing the funding. Studies funded by the
sweetener industry tend to conclude aspartame is safe, whereas studies funded independently show all manner of adverse health effects.

In the early 2000s, Italian cancer researcher Dr. Morando Soffritti, head of the European Ramazzini Foundation of Oncology and Environmental Sciences, conducted aspartame safety studies on rats in an effort to find some answers. His studies were different from earlier ones in that he studied a much larger population of rats (1,900 of the little rodents) and observed them over the course of their entire natural lifetimes (about 3 years).

A very important fact to consider here is that the Ramazzini foundation is a well respected, independent, non-profit institution that has been dedicated to cancer prevention for more than 35 years.

Dr. Soffritti believed the studies done by Searle in the 1970s involved insufficient numbers of rats, and did not allow them to live long enough to develop cancer. The rats in the Searle studies were euthanized after two years, arguably before many cancers would have developed.

“Since 80 percent of cancer is diagnosed in humans over the age of 55, it is of paramount importance to observe how an agent affects laboratory animals in the last third of their lives.”

What did he find? The first study found, after being fed the “human equivalent” of four to five bottles of diet soda per day, the rats developed high rates of lymphomas, leukemias and other cancers. At the highest dose, 25 percent of the female rats developed lymphomas and leukemias, compared with just 8.7 percent of the control group. Dr. Soffritti attributed the cancer to the methanol produced as a byproduct of aspartame metabolism. As with rats, when your body breaks down methanol, the result is formaldehyde, a known carcinogen.

The researchers determined aspartame’s carcinogenic effect was observed at levels as low as 400 parts per million (ppm), concluding the following:

“The results of this mega-experiment indicate that APM [aspartame] is a multipotential carcinogenic agent, even at a daily dose of 20 mg/kg body weight, much less than the current acceptable daily intake. On the basis of these results, a reevaluation of the present guidelines on the use and consumption of APM is urgent and cannot be delayed.”

Not surprisingly, the results drew massive criticism from the industry and vociferous attempts to discredit the Ramazzini Foundation and its research.

But the foundation refused to back down.

In 2007, they published a follow-up study—again finding cancer linked with aspartame use. But this time, their findings included a troubling discovery that when exposure begins in the womb, aspartame’s carcinogenic effect is amplified. Sadly, no American regulatory agency has acted on Dr. Soffritti’s findings, and the FDA stubbornly clings to its position that aspartame is safe.

Watering the Seeds of Deception

The Obama administration has made sure Monsanto will enjoy even more control over what you eat. The appointment of Tom Vilsack to Secretary of Agriculture was a foreshadowing of things to come. As former Iowa Governor, Vilsack was a staunch advocate for Monsanto, genetic engineering, and factory farming. And many other USDA officials have similar ties.

After a five-year battle with the industry, the USDA just gave its stamp of approval for genetically engineered alfalfa and sugar beets. Farmers will be allowed to plant GMO alfalfa and beet seeds anywhere—even abutting organic farms.

This decision poses dire possibilities for our entire food supply as these GM seeds drift hither and to neighboring farms, invited or not. Sugar beets are wind-pollinated crops whose pollen can be carried up to six miles, depending on the winds. Is this really what Michelle Obama wants in her organic White House garden? Beets and  alfalfa are one thing—but what do GMOs have to do with aspartame? As it turns out, quite a lot.

The Connection Between Aspartame and GMOs

Aspartame is made with genetically modified bacteria—E. coli, to be specific. Monsanto uses GM bacteria in the process of making aspartame in their American factories—and insists it is completely safe.

According to an article in The Independent:

“Aspartame is made by combining phenylalanine, which is naturally produced by bacteria, with another amino acid. Monsanto has genetically engineered the bacteria to make them produce more phenylalanine. Scientists fear that other unknown compounds, which may end up in food, are produced by the genetic engineering process.”

Aspartame is composed of two amino acids, aspartic acid and phenylalanine. All products containing aspartame must be labeled with the information “contains phenylalanine” (which is dangerous if you suffer from the metabolic illness phenylketonuria). But additives that are manufactured with the aid of GMOs do NOT require  labeling as such, provided the additive contains no actual microorganisms.

So, two of the greatest health hazards of modern times—artificial sweeteners and GMOs—originate behind the doors of Monsanto, the most powerful biotech company in the world.

“GMO-free” products have outpaced even “gluten-free” products as the fastest growing section of your grocery store aisle. Surveys show that up to 90 percent of U.S. consumers are in favor of mandatory GMO labeling. But the government isn’t listening to you.

Jay Feldman, director of Beyond Pesticides, puts it well:

“The Secretary of Agriculture should have picked up on the transparency advocacy that the President and this administration has put forth. It really is hypocritical of an administration that advocates transparency to support a technology that is secret to the consumer and to people who would like to make an informed choice.”

If GMOs are used in making aspartame, of which few people are aware, how many other products contain GMOs that we don’t know about?

What You Can Do

Only a fraction of all adverse reactions to drugs and vaccines are ever reported—estimates are between one and four percent. Chances are, adverse reactions from other FDA-regulated products, like aspartame, are probably even lower. This is a problem that only you can correct. Your best strategy is to vote with your pocketbook and avoid purchasing any aspartame products.  You can carefully read the list of ingredients and see if aspartame is there and avoid it. Additionally you can avoid the branded labels of aspartame such as:

It would also be helpful to alert the FDA to a problem with a product they’ve approved, they must be notified by as many people as possible who are experiencing the problem. So I urge you, if you experience side effects from aspartame, report it to the FDA without delay.

It’s easy to make a report—just go to the FDA Consumer Complaint Coordinator page, find the phone number for your state, and make a call reporting your reaction.

There’s no telling just how many reports they might need to receive before taking another look at aspartame’s safety and reconsidering their stance. But I CAN tell you, the more reports they get, the more likely that is to happen. So if you suspect you have experienced an adverse reaction from aspartame (or any other drug or food additive), please take a moment to make this important call.