These Cinnamon Scrolls are massively addictive and made even easier to make if you have a bread maker.

You will never buy Cinnamon Scrolls again once you have made your 1st batch.
If you wish you can freeze these buns prior to putting on the topping. I simply keep some of the topping in the fridge and pop it on after they have been warmed through (after being in the freezer). 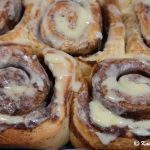